Thank you, Vivian Solomon, for contributing these delicious ideas to our community co-op! Below is Vivian’s recipe for Shanghai Chicken, plus a run-down of the produce in Box #2, and the uses she found for them.

Beets, Spinach, Mixed Greens
I roasted the yellow beets and ate them in a several salads with spinach and mixed greens, along with roasted walnuts and goat cheese – and once with chicken leftover from the stir-fry recipe. Heavenly!

Spinach, Orange
I made another salad with spinach and cut-up orange segments. (Could have been tossed with sliced almonds and a sesame-oil dressing for an Asian salad.)

Spinach
The rest of the spinach was steamed and went into an omelet with sautéed mushrooms and green onions.

Broccoli
Roasted, as a side dish. Leftover roasted broccoli used in a salad.

Bok Choy and Green Onions
I modified “Shanghai Noodles with Chicken” – a stir fry with bok choy. Chicken is cooked separately, so can be added to other recipes or salads.

Kale and Onions
I made your delicious Portuguese and Kale soup, using Johnsville mild Italian sausages that I pan cooked until almost done, then sliced and finished cooking (so the edges would be crisper and hold up better in the soup).

Onions
I added onions to a skillet dinner with red peppers and apple-chicken sausage.

Yams
These were peeled, cut up, and roasted for a side dish – drizzled with a small bit of maple syrup before serving.

Apples
So good, they were eaten raw. Once with a side of almond butter.

Oranges
All but one were eaten as is!

It is always best to start with good quality fresh pasta. Fresh Chinese egg noodles can be found in well-stocked markets and Asian grocery stores. If you cannot find fresh noodles, you can substitute dried spaghetti. Be sure to follow the instructions on the package, as the cooking time will differ. 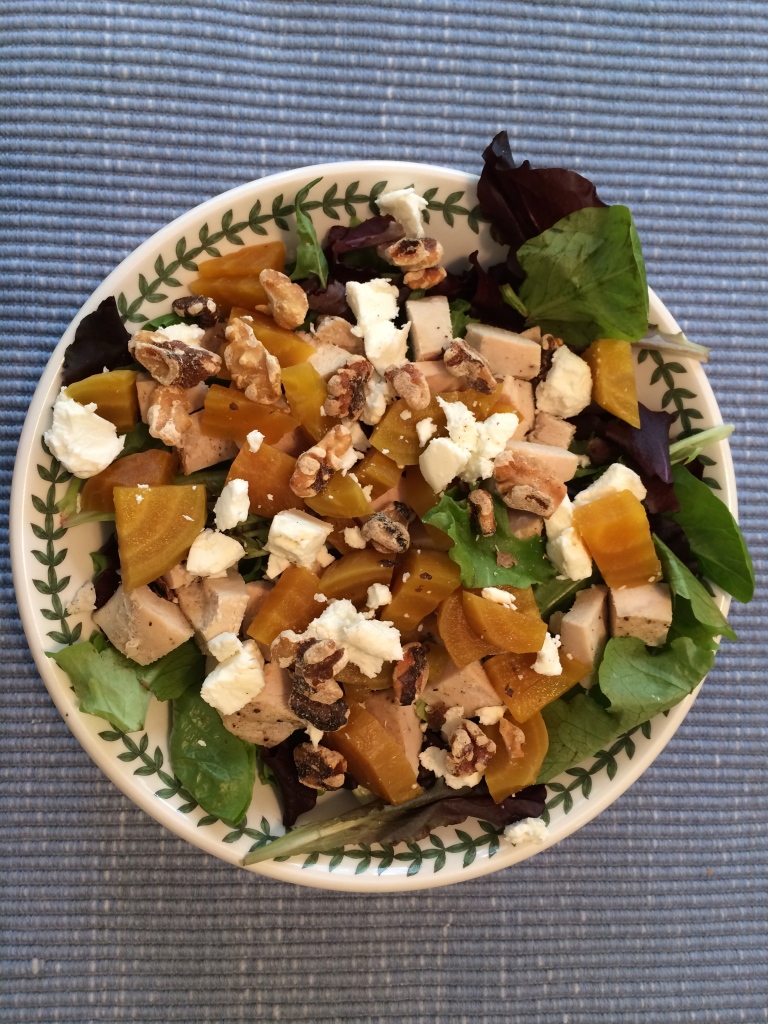 Boil the noodles
Bring a large pot of water to a boil over high heat. Separate the strands of noodles, drop them into the boiling water and boil for 2 minutes. Drain, rinse under cold running water and drain again. Toss the noodles with the sesame oil and set aside.

Stir-fry the vegetables
In a wok or large fry pan over high heat, warm the peanut oil. Add the garlic and ginger and stir until fragrant, about 10 seconds. Stir in the red pepper flakes, bok choy, carrot and the white portion of the green onions. Stir-fry the vegetables until the bok choy wilts, about 2 minutes.

In a small bowl, stir together the broth and oyster sauce and set aside.

Stir-fry the noodles
Add the noodles, chicken and broth mixture to the wok and toss to combine. Cook, stirring often, until the noodles and chicken are heated through, about 2 minutes. Stir in the light green portions of the green onions and serve immediately. Serves 4.

Season the chicken generously with salt and pepper on both sides. Put into a glass baking dish. Roast about 45 minutes (or until the chicken is golden brown and 170 degrees).

Getting introduced to our coyote population this year! We’ve been listening for years, and it’s cool to finally see them up close and personal.
Spring is beautiful and stressful at the same time. We are still waiting on drier weather before we attempt to work up the ground for planting. But! We have lots of happy starts and two new greenhouses that are underway. And the orchard is in full bloom! Here are some recent spring-y scenes from around the farm.
April trail cam highlights (so far). The first one makes me the happiest. Please, please say this is the elusive river otter! 🦦
Spring things!
Loading Comments...
%d bloggers like this: